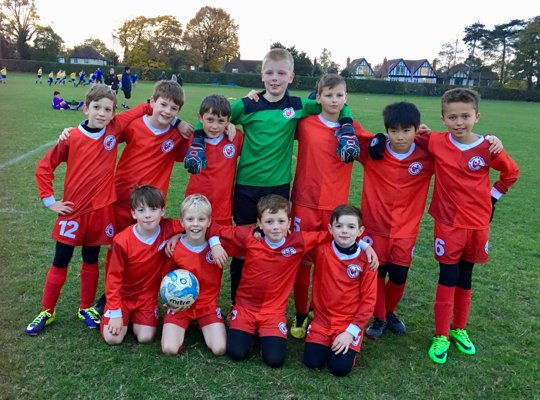 This Monday (5th November 2018) we took two teams of boys to this tournament at Priest Hill. It was going to be a busy afternoon with 15 teams competing and thankfully the weather was fine. The boys were all very excited and we had a lovely number of parents and grandparents supporting us. Both teams started with a win, which boosted their confidence, and both managed to keep a clean sheet throughout the group stage. This allowed our two teams to progress through to the play-offs...... the A team faced Cuddington Croft and the Bs, St. Clement's. Both had tough games but the B team managed to tuck two goals in to secure their place in the quarter finals. They then took on Danetree and it was end-to-end stuff. Either team looked capable of taking the lead but it eventually finished as a goal-less draw so t was penalty time! Unfortunately, the B team had two of their shots saved which ended their adventure, but they were very gracious in defeat and heartily congratulated Danetree afterwards.

The A team saw off Cuddington with a 2-0 defeat and went on to play St. Joseph's in the semi-finals. That game ended in a draw so had to go directly to a penalty shoot-out also, which they took in their stride and calmly won to progress to the finals against Southfield Park. It was getting dark and cold (plus it was Parent's Evening) but nobody wanted to miss a moment of the final where shots were being fired left, right and centre but nothing got past the two amazing goalies. Then the final whistle blew and it was still 0-0, so more penalties!!

Tension was high amongst the supporters, not to mention the players, as each brave young man stepped up to the spot. Goals were being scored and saved on an equal basis and we were running out of players to take the shots. It was down to sudden death ……. when suddenly we scored to seal the deal and the victory was ours! Congratulations to all our players who were excellent ambassadors for the school and kept all our spectators fully entertained!

The A Team will now progress to the county level tournament, representing Epsom & Ewell borough.

And good luck to the girls' team who play in their tournament next Monday (Monday 15th November 2018) , I have a good feeling about them too!