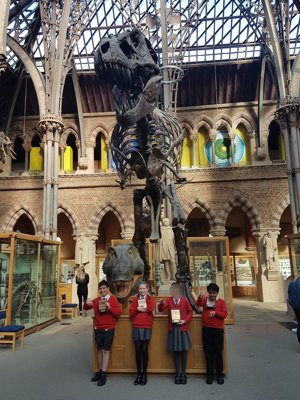 On Monday 11th March 2019, Diana J, Aidan C, Rayan AB, and Elena E took part in the National Year 5 & 6 Science Championship finals at Oxford University Museum of Natural History.  They played against 10 other teams and had to answer 40 extremely difficult questions.  They started in the lead and moved between first and second place with one other school.  At the start of the last 10 questions, they were in first and had an inevitable win by the final few. They ended with 1,935 points and were 380 points ahead of the second place team. Each team member received a plaque and certificate, while a larger plaque went into the school trophy cabinet. By bloggers Tom K and Elena E.